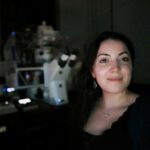 Joana Faria, a postdoctoral researcher in David Horn’s Lab (BCDD-WCAIR) who is moving to establish her own group at the University of York, has been awarded the Wellcome-Beit Prize.

“I am so grateful to the Wellcome Trust for supporting me and my research and recognising the importance of the work I have been doing and want to do next in Trypanosomes. I could not be more humbled by this award, especially considering that Trypanosomes are often disregarded as relevant model systems outside the Parasitology community.”

The prize is awarded by Wellcome to their most promising fellows who are starting to lead their own independent research programmes. Sir Otto Beit founded and endowed these fellowships in 1909 as a memorial to his brother Alfred. The aim was to promote the advancement of medicine and allied sciences. The prize provides £25,000 to each fellow, to use in their research. The prize is considered during interviews for Wellcome’s Fellowships. Joana was awarded a Sir Henry Dale Fellowship earlier this year.

During her five years in Dundee Joana’s research has been recognised with the School’s Molecular and Cellular Biology Prize and the SULSA Early Career Research Prize for Development and Regulation. Joana also won an award for her presentation at the prestigious Genetics Society of America’s Molecular Parasitology Meeting in 2020.

As part of her research Joana has taken a number of colourful images of her parasites. Her image entitled the ‘VEX’ed Trypanosome’ earnt her a finalist place in the Infectious Diseases Hub photograph competition in 2019.

Everyone at WCAIR wishes Joana well in her future career and especially her move to her first independent position at the University of York.