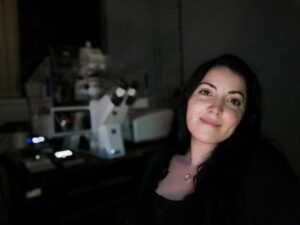 Joana Faria, a postdoctoral researcher in David Horn’s Lab has been awarded a Sir Henry Dale Fellowship funded by the Wellcome Trust and the Royal Society. Joana was awarded over £1 million and will use this award to set up her laboratory at the York Biomedical Research Institute, University of York. Joana will study how a cell controls the expression of one gene out of a large gene family that code for variations of the same functional protein.

Several pathogens, including African trypanosomes or Malaria parasites, which are responsible for high mortality among some of the world’s poorest populations, undergo a process called ‘antigenic variation’ in order to evade the host immune response. They possess large families of genes that encode for surface exposed proteins (antigens). The parasites have the ability to change which variant of the protein they express on their surface so that the human immune system no-longer recognises the parasite and attacks it. This sophisticated and fascinating defence mechanism poses a great challenge to vaccine development which relies on recognising the same protein on the parasite surface.
The ability to express a single antigen at a time from a large genetic repertoire – monogenic expression – is critical for immune evasion. However, the machinery and mechanisms underpinning monogenic expression have remained mysterious for decades in most eukaryotes.

African trypanosomes, in particular, are masters of disguise and express a single antigen (variant surface glycoprotein, VSG) in a selective fashion from a large family of thousands of VSG genes. The expressed VSG covers the surface of the parasite like a uniform shield, serving as the dominant antigen to be recognised by the immune system. During the time she spent in David Horn’s lab Joana identified key regulators that sustain VSG monogenic expression, and more recently, the striking nuclear context within which these protein condensates operate, co-ordinating key interactions among different chromosomes, and also revealing a novel mechanism of gene expression control.

Joana says “My postdoctoral work opened novel exciting research avenues. Indeed, I now want to use multidisciplinary approaches to characterise the molecular mechanisms underpinning single gene choice in Trypanosomes, as well as identifying the network of factors involved in this complex process.

“I have been in Dundee for 5 years and I really enjoyed my time here. I tried to make the most out of this highly stimulating research environment, not only by accessing the great facilities we have at our disposal, but also by taking advantage of the local expertise through collaborations with several talented colleagues. Notably, I have been fortunate for having such a great mentor as David, who has greatly encouraged me and supported me as I attempted to become independent.

“I will be sad to leave, but it is time for a new chapter, and I really look forward to moving to York. I am excited to join the Biology Department and apply genetic, biochemical and imaging techniques to tackle my research questions. I will also expand my skillset to CryoEM and biophysics of biomolecular condensates (non-membrane bound bodies, which can compartmentalise several cellular functions) in collaboration with colleagues at the Chemistry and Biophysics Departments and in the USA.

“I feel so honoured and lucky to receive this award. It will allow me to commit 100% of my time to the pursuit of the research questions I am passionate about. It is truly a privilege. I would like to stress that the molecular understanding of antigenic variation is of great value as it sustains infections by some of the deadliest parasites. Additionally, I strongly believe that Trypanosomes are a great model system to study single gene choice and post-transcriptional gene expression regulation with broad implications in Eukaryotic Biology.”

The Sir Henry Dale Fellowship is a partnership between the Royal Society and the Wellcome Trust and provides support for postdoctoral researchers who aim to become independent scientists leading their own groups. The scheme usually funds up to around £1.2 million, including salary and research expenses during a period of 5 years. This scheme will close in 2021 and has been replaced by the Wellcome Career Development Award.

Read how collaboration was key to the discoveries in Joana’s latest paper.

Or you can read her work in full here: