At WCAIR scientists are exploring new methods to help us perform target based screens more effectively. One method used in target based screens is X-ray crystallography. X-rays allow scientists to visualise compounds bound to the target protein. It can be used to select for the molecules within a compound library that bind to the target. To increase the chances of finding molecules that bind, we start with smaller compounds (molecular weight 150-250 Da) than are found in traditional drug discovery compound libraries. These are referred to as fragment libraries. Methodology developed at the Diamond Light Source, Harwell, allows scientists to screen thousands of fragments over a few hours. In collaboration with Diamond WCAIR scientists have set up this technology, known as XChem, ‘in house’.

The driver for XChem is to work on a very small scale, carry out as many tasks as possible in parallel, use computers to automatically do all the note-taking, and use robotics to do most (but not quite all) of the intricate work for us. Crystals are grown in droplets of liquid of just a few hundred nanolitres (1 nanolitre is 0.000001 of a ml), into which a specialist acoustic dispenser (similar to an inkjet printer) then deposits a few nanolitres of the chemical fragment being tested. They are then left for a several hours to allow the fragment to soak into the crystal. If, and only if, the fragment binds specifically to a site on the protein will we be able to see it in the final structures via a technique called X-ray crystallography. Getting crystals ready for an X-ray diffraction experiment is the one part of the procedure that robotics cannot perform, and we have to rely on the skills of our protein crystallographers to do this. However, we have in place the “Shifter”, a piece of equipment that makes this easier and significantly faster than standard manual harvesting. Various software tools are then used to process the diffraction data collected, easing some of the load on the crystallographers as they search through the numerous datasets for the successful fragments.

XChem relies on being able to make and crystalise the target protein in a form that replicates the natural shape of the protein in the cell. In parallel with setting up the XChem screen WCAIR is developing high throughput protein production methods.

The methods and technologies under development allow us to test different ways of making the protein in parallel with the aim of finding a suitable construct as efficiently as possible. The best method is then scaled up to produce enough protein for the XChem screen and potentially other biophysical screening methods.

Decoding the X-ray patterns to show the scientists the fragment bound to the target requires specialist software and a team of computational chemists who know how to interpret the data. This is just the starting point. The structures guide the chemists in to how to build up the fragments into larger molecules with more interactions with the target protein and should therefore bind the target at low concentrations, one of the goals of designing a good medicine. Compounds identified through this route enter the design-make-test cycle as they progress from hit to lead to lead optimisation  (see Creating the right chemistry). 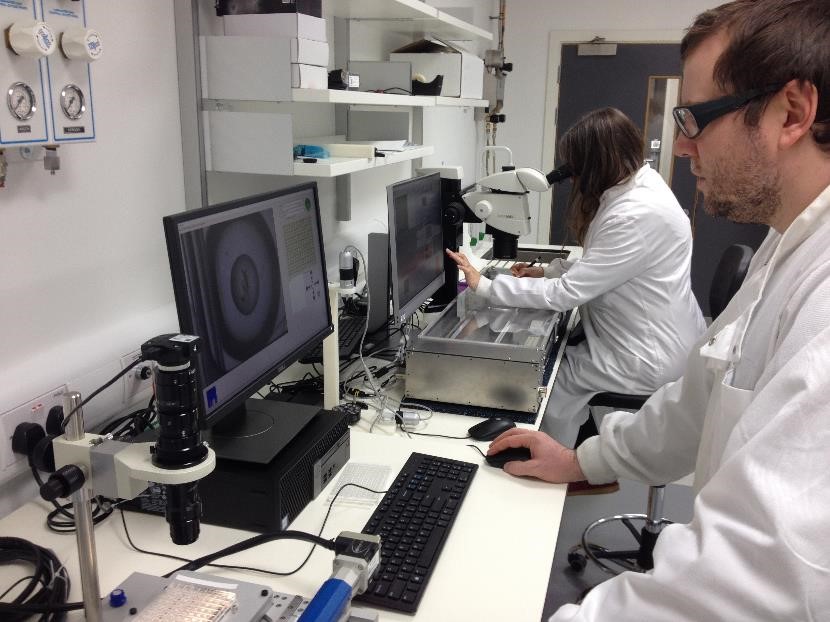