Once parasites enter the host’s body, they turn on genes that help them survive. Trypanasoma brucei (T. brucei), the parasite which causes African sleeping sickness, employs a complex and fascinating system to regulate the genes. It is the precise regulation of these genes which determines how successful the parasite is at surviving and spreading.  David Horn’s group uses genetic approaches to understand the fundamentals of gene expression in T. brucei. Uncovering how this process works may illuminate new drug targets, or help us understand similar processes in other parasites, including malaria.

T. brucei are extracellular parasites found in the bloodstream, the adipose tissue, and the skin. Living in the space between cells means they are easy targets of the host’s antibodies. To avoid antibody-mediated attacks by the immune system, they cover themselves in a protein called VSG, “variant surface glycoprotein”. As the name suggests, these glycoproteins (made of carbohydrate and proteins) are found on the surface of the parasite. They act like a thick coat, disguising the parasite from the immune system. The big mystery is that even though the genome of the parasite encodes the recipes to make thousands of flavours of VSG molecules, their coat is only made up of a single flavour of VSGs at a time. How they only turn on a single VSG gene at a time is a mystery, but the reason behind it makes sense. Wearing a coat of a single fashion provides a disguise from the immune system. 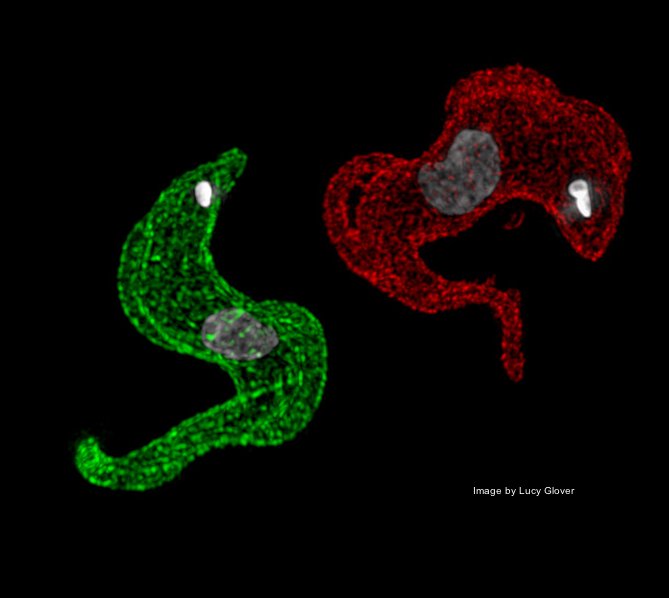 As soon as the immune system develops antibodies that recognise that style of coat, they shed the no longer fashionable coat and put on a new one. Basically, they turn off one VSG gene and turn on a different one. How exactly they only express a single VSG gene at a time (called monoallelic exclusion), and how they decide to “switch” is a great mystery being explored by the Horn Lab.

Additional advances in CRISPR/Cas9 technology developed by the Horn lab allow us to precisely edit the genome of T. brucei and explore how VEX1 and other factors affect gene expression (Read paper). By better understanding how parasites control expression of virulence genes, we hope to identify new targets for therapeutics.

The Horn Lab work closely with the Mode-of-Action team to utilise genetic tools to understand how drugs kill the parasite. Genetic tools have also been instrumental in identifying new drug targets in T. brucei (Read paper) and explaining how parasites develop drug resistance (Watch a short film or Read paper).

Read more about the research in the Horn Lab