The data generated by years of research by scientists across the world can now be harnessed through computer software. Data generated by experiments and the rules of chemistry, physics and biology are used to create software that allows us to visualise structures (models) and examine interactions between our compounds and their targets. At the moment the software helps us to better interpret the results of our target screens and guide us in the next steps of designing our lead compounds.

The vision is to be able to use computers to create a model of the target protein and then do a virtual screen of fragments against the target. The computer would create a model which shows how the chemical groups in the fragments interact with the chemical groups on the protein target. Researchers could then explore how changing chemical groups on the fragment improves the interaction with the target. They could also add additional chemical groups to the fragment building up the compound to improve its ability to bind to the target and selectivity for the target over other related proteins in the body. As well as modelling structural interactions between compound and target, researchers would like the computer to also provide feedback on whether the compounds they are designing have the correct properties for a medicine [link back to making a med]. The information gained from the computer models would then be used by the chemists to better design and synthesise compounds for testing in assays. The goal is for the computer to help the chemists reducing the number of possible starting points from one hundred million to one hundred.

Researchers at WCAIR will be working with other groups interested in solving this challenge. It is a collaboration between chemists and computer scientists to apply computational methods, e.g. artificial intelligence and machine learning methods.

The computational chemistry group in WCAIR have been taking steps towards achieving this vision. The group have developed models to help predict how well a particular chemical fragment binds to a target. They have used quantum mechanics based affinity prediction. They have compared their computer based predictions to experiment derived data and see a good correlation.

They have also been experimenting with virtual screening. Initial computer calculations did not perform well, with very little correlation between the computational and actual experimental results. However the group found that adding in an additional analysis step in which the computer’s results were compared to a model generated by experimental data (interaction fingerprint) they could improve the predictive ability of the computer. 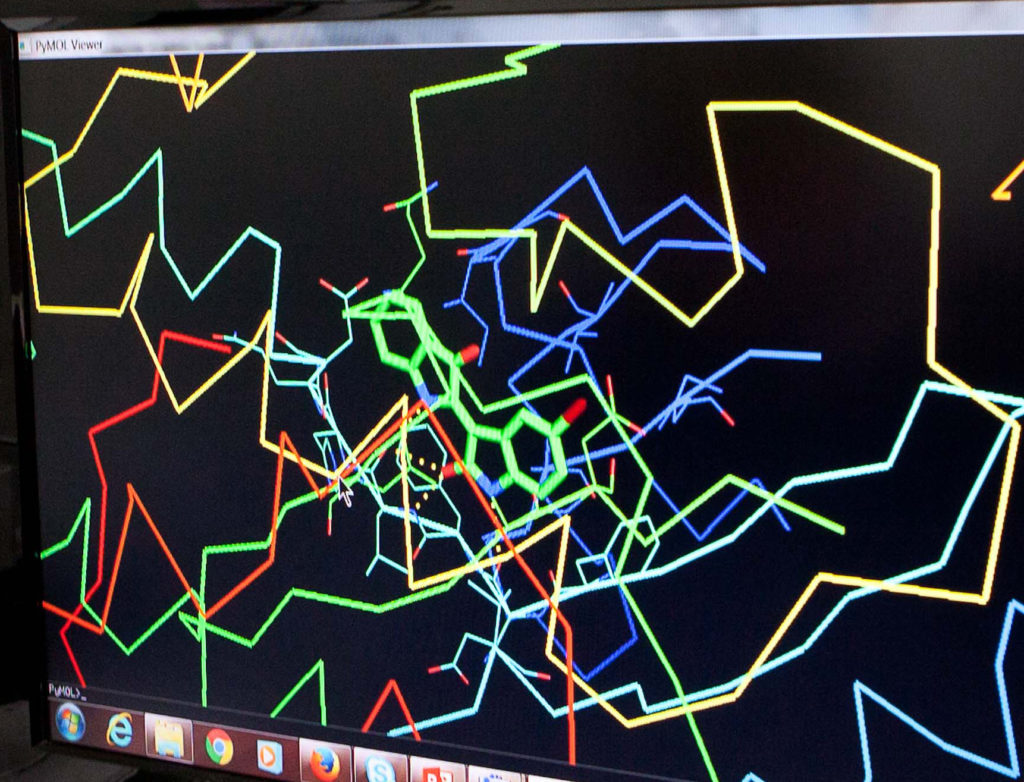 Visualisation of a compound interacting with target protein. The Software is used to explore the shape of the binding site and the interactions formed between the compound and amino acid side chains within the binding site.

We still have a lot of work to do before we can rely on virtual rather than real screens. However this is an active area of research not only at WCAIR but across many other academic groups and private companies. The competition and collaboration will move this field forward and provide improved solutions over the next 5 years.