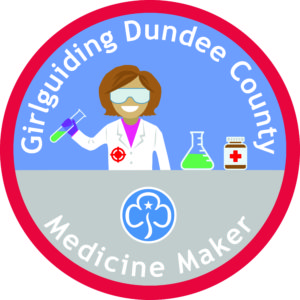 Girlguiding is an institution with a hugely storied history. Founded over a century ago, it has encouraged girls and women to take on challenges, have adventures, and discover new things. At WCAIR, we’re really interested in encouraging people to engage with science from as many different backgrounds as possible. As women tend to be less represented in STEM areas, we were incredibly excited when one of our team members suggested making a new Girlguiding badge.

The Medicine Maker challenge covers a broad range of what we do at WCAIR. If you take on the challenge, you can explore how chemists and biologists work together to find and improve potential medicine molecules. You’ll also investigate some of the microbes that cause diseases, and why they are important to society. We’re also really keen to celebrate the contribution that women have made to science, so that’s a part of the pack too. Here it is:

What do you think?

We’ve had a great time making the pack – it’s been a real labour of love! We’re also really interested in finding out what difference the pack makes to you and your unit. We’ve set up a really short evaluation form so you can tell us as a leader what you’ve done and what you think. They’re only a few questions, but we know they’ll work better for adults than units full of young people. We also have another idea we know works really well with bigger groups…

We’re interested in seeing what people think of us, as scientists in society. If you could ask your unit the same question before and after the pack, it will tell us a lot! We often like to say “give us three words you think of when you hear the word scientist”. If you want to ask a different question, that could also be really interesting – just make sure you ask the same question before and after doing the pack. We’d be incredibly grateful if you could then tell us your question and the words you got from the two times. We’re collecting lots of these words, and they’re providing some fascinating information! You can email us, or send us pics of the words on Twitter, or even post them to us.

We look forward to hearing from you!