We asked David why he became a scientist

David Gray has been promoted to Personal Chair. He takes the title of Professor of Translational Biology which is in recognition of his extensive work within the Drug Discovery Unit (DDU) and Wellcome Centre for Anti-Infectives Research (WCAIR). 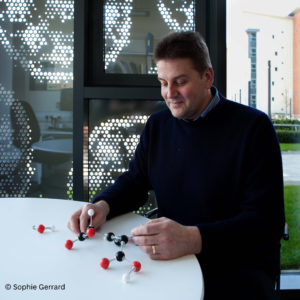 David said “My promotion is built on the efforts of an excellent team of committed and talented scientists, the support of my colleagues in the DDU leadership team and collaborating scientists from around the world. We share the desire to transform drug discovery to deliver new medicines for some of the most problematic global diseases. I would like to take this opportunity to thank them all.”

David joined the DDU in 2010 as Head of Biology. He is responsible for a line team of more than 40 scientists with a diverse range of scientific expertise and is accountable for the quality and effectiveness of the biological experimental design and data that underpins all of the DDU portfolios of projects.

David has a specific responsibility as Principal Investigator on projects with Drugs for Neglected Diseases Initiative (DNDi) and Medicines for Malaria (MMV) plus is academic lead on the Innovative Targets Portfolio (ITP) that encompasses high quality projects in any therapeutic area where there is a clinical unmet need. Recent successes from these various projects include:

Prior to joining the University, David spent 15 years in industry at GlaxoSmithKline where he was latterly Director of Screening & Compound Profiling. David has been involved in a number of projects delivering clinical candidates, including Fluticasone Furoate which is a component of the marketed products Avamys, Relvar and Trelegy.  These drugs are used to treat rhinitis, asthma and COPD. David has a Ph.D and B.Sc (Hons) in pharmacology from UCL and Glasgow University, respectively.